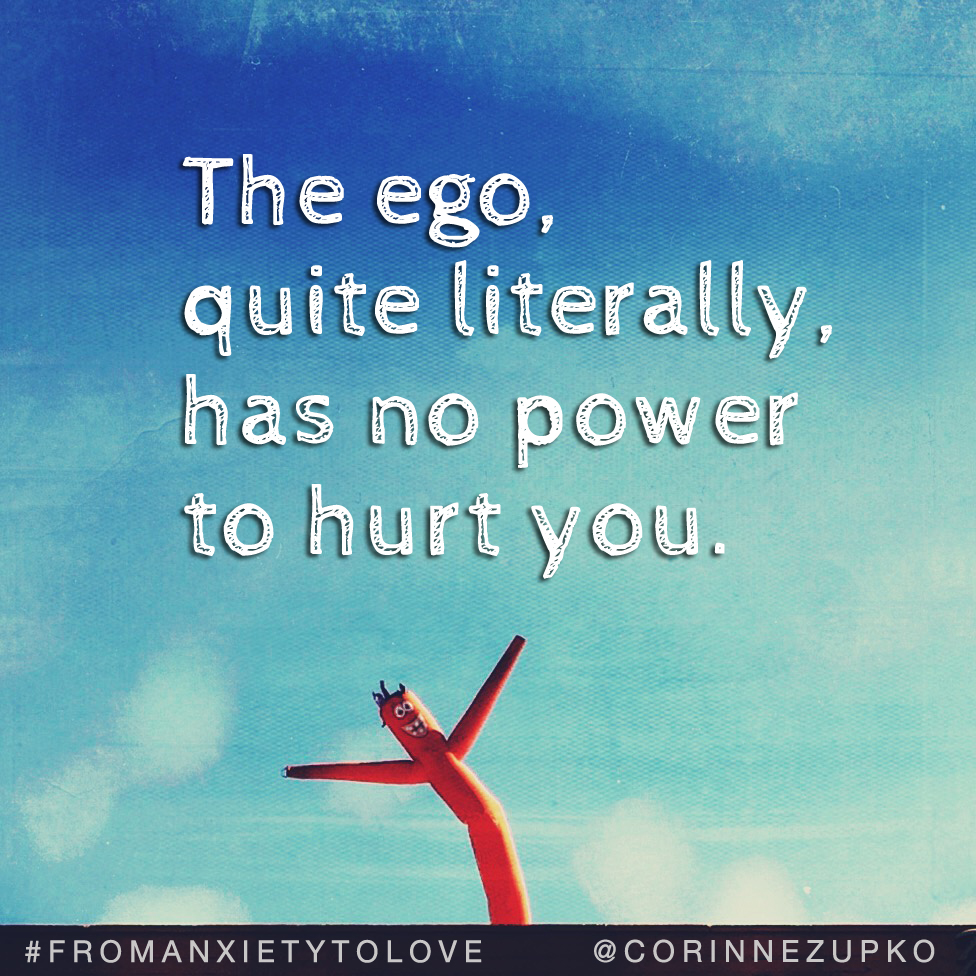 I used to get really freaked out that the more I turn to love, the more the ego is going to roar at me and whip me back into its little place. Many students of A Course in Miracles (ACIM) talk about the “ego backlash,” for the Course addresses that the ego (which is simply a BELIEF that we are separate from our Source and WANT to remain so) will pull out any evidence to “prove” you are not of Love.

“The ego will make every effort to recover and mobilize its energies against your release. It will tell you that you are insane and argue that grandeur cannot be a real part of you because of the littleness in which it believes.” ACIM Original Edition T-9. VII.51

Although the ego is perfectly capable of having hissy fits and doing what it can to get your attention, you do not have to fear any sort of backlash.

I was recently facilitating a weekly ACIM Study Group call and we were discussing the “ego backlash.” I was describing why we shouldn’t be afraid of a backlash because, first and foremost, fearing a backlash in and of itself IS FUELING the ego. By fearing the ego’s tantrums we’re giving it power, filling it up with the fuel it needs to exist.

As I was sharing this on the call, I simultaneously asked Spirit to give me a concrete example to illustrate this point. An impression immediately came forth of a whipping, flipping giant balloon-man! You know… those tall balloons that are powered by a fan and the tall skinny balloon-guy wildly whips back and forth with the wind that fills it.

This crazy, nylon balloon-guy represents the ego – a hollow shell filled with nothing. It is only seemingly “scary” when it is puffed up with moving air, and the moving air represents our belief.  It is so important to note that WE are the ones that are choosing to point the fan into the balloon to fill it up and terrorize ourselves. Why? Because we still think that being separate even in some small way, from our Source, makes us happy.

As we turn with willingness to Spirit within, the miracles that we experience help develop our trust that we are NOT alone and have a Guide that goes with us on our journey of awakening. As our trust deepens, we start turning the fan (our belief) away from the compelling wild and crazy balloon-guy (ego), choosing instead to  believe in the ever present breath of Love that permeates everything. This deflates the ego. It loses power, and it has no force of its own to “backlash” – because you’re no longer pumping air (your belief) into it.

“The truly helpful are invulnerable because they are not protecting their egos, so that nothing can hurt them.” ACIM Original Edition T-4.VIII.102

“Not protecting” the ego is like not blowing the fan into the balloon. By being willing to question every belief that we hold, by being willing to look at our beliefs WITH Spirit, and to decide “I know nothing” is to allow the ego to be shined away. It, quite literally, has NO power to hurt you.

Has the idea of an “ego backlash” freaked you out in the past? How have you overcome that fear? Share your light by leaving a comment below.